To finish up this years #DirectedbyWomen celebration, some of the SQ staff have decided to share their personal favourite women directed films….

‘Blackfish’ has been one of the most popular and widest reaching documentaries of recent years. Premiering at the 2013 Sundance Film Festival, the film called for a boycott of Seaworld after helping to expose the company’s cruel mistreatment of orcas and the deceitful way in which it operates. Since then, ‘Blackfish’ has certainly made an impact; by November of last year, Seaworld’s stock had plummeted to just 50% of what it was 12 months previously. The film has made an emotional connection with a huge audience and credit goes to the director (as well as co-writer and co-producer), Gabriela Cowperthwaite.

Taking on a corporation as massive and beloved as Seaworld is difficult. Making a documentary about something as controversial and perhaps, if done poorly, untouching, as killer whales, is difficult too. Cowperthwaite did both and she did both with ease. By structuring her narrative around the tragic deaths of three trainers at Seaworld, she ties together the human and animal tragedy – they’re inseparable and the same. Integrating this with a damningly critical debunking of all Seaworld’s claims about their ethical conduct turns the audience’s upset into anger. After you see ‘Blackfish’, it’s easy to see why the boycott has been a success. –Ashley Woodvine

Niki Caro’s North Country is a rousing and courageous drama. The film is based on a book detailing the real life court case Jenson vs. Eleveth, which changed the sexual harassment law. Charlize Theron gives another amazing performance as Josey Aimes, mom of two who moves back to her Minnesota home after leaving her abusive husband. She takes a job at an iron mine- the same workplace as her father. Mr. Aimes, like the other male miners, dismiss the female workers and insist that it is a man’s profession.  Their objections eventually elevate into verbal and physical harassment, culminating in pornographic graffiti and putting semen in their lockers. All the while, the men whine that the ladies should have “a sense of humor” about it. Josey does not find their disgusting behavior very humorous, and insists that they should sue the company. But getting to court is not easy, for Joey has to find three other women who will sue alongside her. While the women are upset by these sexist actions, they are used to being silenced and keeping their head down. During the eventual trial, Josey’s status as a single mother and her past sexual history is called into question, as it always unfairly is for women in court. As if her history means she deserves being harassed! Rounding out the cast is Richard Jenkins, who gives a wonderful performance as her angry-turned-accepting father, Jeremy Renner as the ultimate workplace creep, and Frances McDormand as another mine worker stricken with Lou Gehrig’s disease. Through Josey’s advocating, a sexual harassment policy was enforced in the workplace, the union having previously given no protection for female workers. North Country is a moving story of sexual harassment’s harm, in big ways and small, and the power of standing up against it. –Caroline Madden 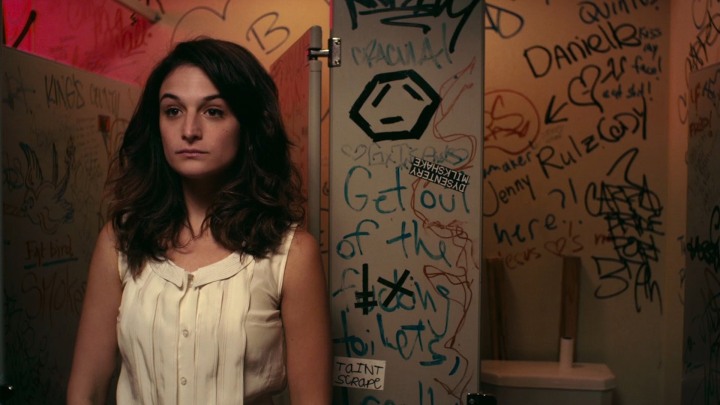 Only one minute into Obvious Child and I was sold. The opening scene features Donna (Jenny Slate) doing a stand up comedy routine in which she talks about what it’s like to have a human vagina and holding in farts when her boyfriend is around, and it’s hilarious.

Jenny Slate gives an amazing performance, which manages to be both funny and emotional as her character deals with painful real life situations. Aside from the romance, this film also deals with unplanned pregnancy and abortion, things that a male writer/director simply just could not relate to.

When women characters are portrayed as funny in films directed by men, they are usually (not all the time), being made fun of for their feminine qualities and are fetishized by the male gaze. Barely ever, are women in male directed comedy films actually smart and witty like Donna is. Instead, they’re portrayed as the klutz or the slut or the bitch or the manic pixie dream girl.

There’s this ancient myth that women aren’t funny and therefore are not given substantial roles in comedy films. I’m really glad that women like Gillian Robespierre are writing and directing films like Obvious Child that portray women as they deserve to be portrayed and as they are. –Shaianne Hugh

With a name like The Slumber Party Massacre, this movie has one of the most predictable plots of all time: a group of girls and their friends get terrorized by psycho with an affinity for power drills. But that doesn’t stop it from being absolutely awesome.
Written by notable feminist Rita Mae Brown and directed by Amy Holden Jones (who would later go on to write Mystic Pizza, another cult classic), this film has everything we want from a campy 80’s film. It’s got a totally rad wardrobe, an awesome synth-heavy soundtrack, and some bitchin’ slasher violence! It also contains almost every horror trope known to film, and completely flips them on their head. Which is what makes me love this film so much.
First off, the girls are the resilient jocks. They play basketball and they’re confident and they’re not so worried about the opposite gender. The boys, on the other hand, are much more concerned about who they’ll be going out with on Friday night, and whether Jessica likes them or not. They’re also the ones who make all the guaranteed-death decisions, like choosing to go out alone and investigate while the girls decide to stick together and hunker down until help arrives. It’s only after all the guys perish from sheer stupidity that the girls start dying.

As a huge horror fan, it’s really cool for me to watch the classic formula get a gender-bend. All of the resulting lesbian and feminist overtones make this movie so fun. I especially enjoy the killer getting his clearly phallic drill chopped in half by one of the girls. It’s great to see a typically male perspective-centric genre give the girls a chance behind the wheel. –Tyler Dziubinski

Patty Jenkins’ telling of the story of Aileen Wuornos, the first woman serial killer in the US, is a beautiful, beautiful piece of film. Not only because of the stunning and wholly transformative performance from Charlize Theron in the lead role, which is definitely up there in my Top 3 female performances of all time.

Jenkins tells Aileen’s story with a neutral lens, allowing Charlize the room to act freely and show a more multi-faceted view of Aileen than the media and other outlets have previously painted her in. This means we see Aileen’s life prior to her murder spree, her relationship with partner Selby (played by Christina Ricci) and the trials and tribulations she faced as a prostitute working the streets and th abuse she dealt with at the hands of slimy men. Jenkins and Theron hand-in-hand walk through Aileen’s life and tread very lightly, giving careful consideration to each factor that made her commit such horrible acts.

I feel that it is solely a woman’s touch such as Jenkins’, that allows us to ultimately empathise with Aileen and whilst not support her acts, be able to come to a level of understanding about what drives a struggling and abused woman to murder. –Chloe Leeson