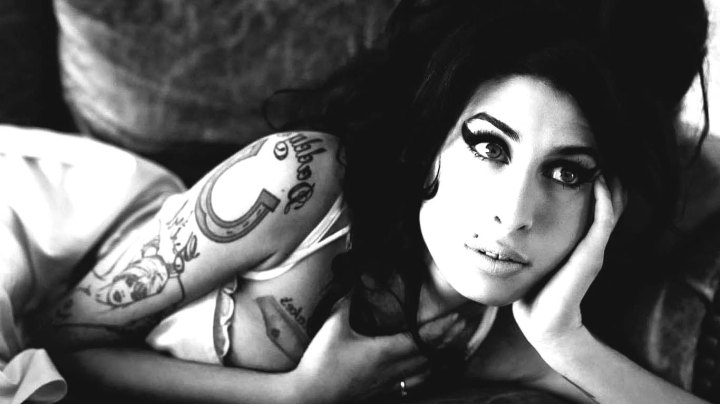 Amy Winehouse is not reduced in this film. Her life is shown piecemeal, beginning with a beautfiul home video of Amy singing Happy Birthday. She is with her friends and suddenly steals the show with her voice. They react as if this has happened before.

The story continues through video clips and interviews with friends. It feels overwhelmingly tragic and in hindsight all the warning signs are there. An alcohol problem, addiction, denial, partners whose love is destructive.

The most lovely parts of the film highlight her astounding presence and humour, the hugeness of her personality and her voice. The video of her Grammy acceptance is incredible – she appears to be a speechless oasis surrounded by very excited people celebrating. Footage of Amy in interviews where you can see her suddenly become very bored and very funny is a joy to watch.

The film reveals Amy’s nerdiness when it came to jazz as she fangirls over Tony Bennett, seeking perfection when she records with him. I loved this because it made me think of all great musicians as being secret geeks, obsessing over music in a most academic way. A lot of her music was used in the film beautifully, and her lyrics were always captioned which was an excellent way of showing how great a lyricist she was, and how personal and confessional her songs were.

As much as the film celebrates Amy Winehouse and her talent, it feels something of a post-mortem. The viewer is drawn to possible contributors to her death. Should we blame Mitch Winehouse, her father; denying early on that she needed treatment for alcoholism, or her husband Blake Fielder-Civil who has been blamed for her spiralling addictions to heroine and crack and who Mitch Winehouse once described as “the biggest low-life scumbag that God ever put breath into”? Or should we blame the music industry itself, which pushed her to work and perform when she was not well and needed help?

She appeared to be constantly hounded by the paparazzi, her career and life lived on camera, even to the extent that parts of her funeral and the ambulances that responded to her death were recorded by onlookers, in a way that was invasive and heartless.

Amy is a film that shows Amy Winehouse’s difficult life, immense ability, and early death in a passionate but measured way.

Maya is a seventeen year old from Lincolnshire who spends all her time thinking about teen films, Gael Garcia Bernal and feminism.  Her favourite films include Pride, Mood Indigo, Lore, and Ida. Tweet her about burritos @ayaM_esoR

‘Relic’ Shows us a Haunted House with an Aching Heart