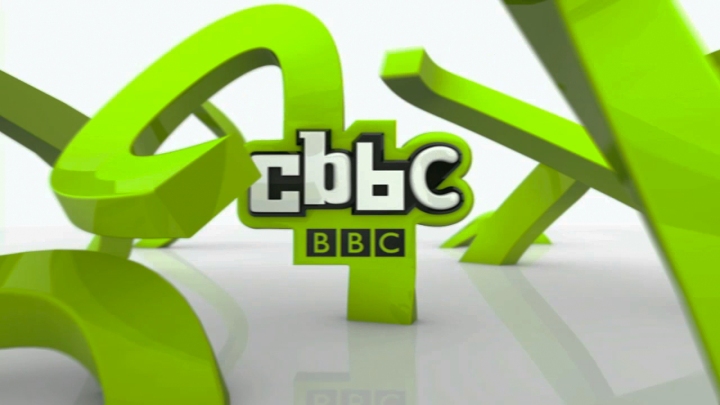 It’s sometimes the small things which make you feel like an ~outcast~ as a kid. You focus more on what you don’t have at that age than appreciating what you do. Trying to fit in is a struggle and everything becomes embarrassing. For me, one of those pointless-yet-humiliating ‘secrets’ was only having five television channels. By the time I was in secondary school, we’d upgraded to freeview, but even then saying you didn’t have Sky turned into a warped battle of TV privilege. Growing up poor doesn’t really give you the best options (except, my mum did get the family a computer which replaced our need for TV long before anyone knew what ctrl, alt, delete was. We were ahead of the times).

I settled for EastEnders, Neighbours, Home and Away outside of targeted children’s shows, and watched a lot of Milkshake on channel 5, CITV and CBBC. CBBC was my go-to mostly, especially as the years went by and I started to grow out of CITV and Milkshake. (Though I would catch My Parents are Aliens after school and Noddy in the mornings, when I was long past Noddy viewing age by a good ten years.)

As an adult, I’ve had the chance to watch shows that so many people have told me I’d missed out on. While there are some great programmes my childhood lacked, particularly on Nickelodeon, I realised that the quirkiness and complete disregard for any kind of coherency in the type of TV that CBBC aired made their programming interesting. Some digital-only shows found their way onto CBBC – and CITV -, but it was, mostly, the exclusive programmes specific for CBBC which I find myself thinking about decades after. And here’s some of my favourites.

I experienced my first sexual awakening (that didn’t involve Jim Henson puppets or dead guys) watching UGetMe. Every time I looked at Luke Bailey – and, considering he was the main character in the show, that was a lot – a funny feeling in my stomach, and later my pants, awoke and it was awesome, so very awesome

Looking back, I blame Bailey’s influence on what I find physically attractive in men now. (Thanks mate.) He went on to be one of the main protagonists in Waterloo Road for at least a season and, as a teenager, I got to experience that feeling he gave me as a pre-teen all over again. Bliss. Utter bliss.

(I didn’t really pay much attention to what was happening in the show, but why would I have needed to? He was an underground radio DJ and that was cool as fuck. It still is cool as fuck.)

50/50 was brutal. The physical parts of it seemed fun, but when the ‘Brain Buster’ questions came round I would shit myself for some of those clueless-faced kids. Rewatching episodes to write this piece, even I – as a 20something-  had no idea what the fuck some of the answers to those equations were. Conferring among your team was banned, but to the point where it turned into 1984-like regulations. Even if whispers were heard from other teammates, nowhere near to the person answering the question, they still wouldn’t get the point even if they were right.

Imagine what Big Brother would be like if it took tips from 50/50. Hell, that’s what.

3. Get Your Own Back 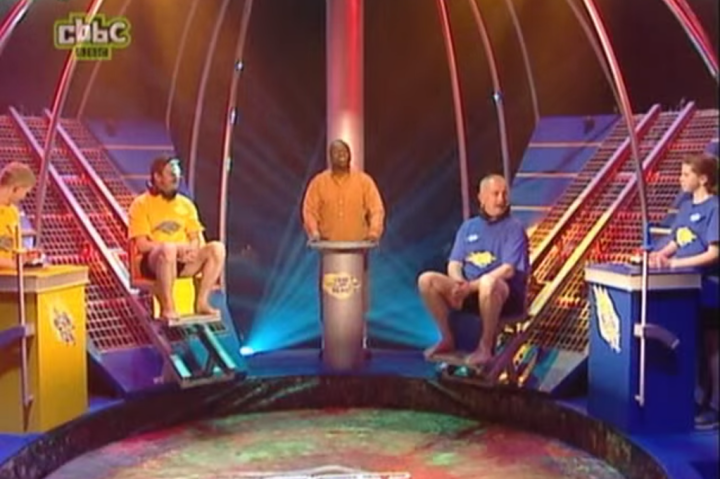 Get Your Own Back was the ultimate revenge show. Adults weren’t the cruel dictators like in 50/50, instead, they were the victims. And I loved it. When you’re always told what to do by your parents, grandparents, uncles, aunts, teachers or other older people in your life, Get Your Own Back became every kids fantasy. The moment when some twatty adult would get gunged, to this day, brings me a sense of elation. (In case you were wondering, most of them were deserving.)

4. The Story of Tracy Beaker

What makes great television targeted for a younger audience is the ability to discuss real-life issues in ways that are understandable, at the same time as being relatable. My appreciation for The Story of Tracy Beaker isn’t tinged by nostalgia, which you could argue for some of the shows in this list. The reason why it is here is because it’s a damn good programme and one that I have revisited many times since watching its original run.

Based on Jacqueline Wilson’s book of the same name, The Story of Tracy Beaker follows its titular heroine, Tracy, and her life in a care home nicknamed by the kids living there as The Dumping Ground.

As the series goes on, other people are introduced and it becomes less about Tracy and more about the struggles of all the Dumping Ground kids. There are happy moments, equal to the sad ones, and it’s clear how many characters put on facades to mask what is really going on so they can get through the day. It’s a perfect example of children who shouldn’t have to face adult situations, being thrown directly into them and managing as best they can.

5. Yvon of the Yukon

Replace Fry from Futurama with Yvon and you’ve got the premise of Yvon of the Yukon. Yvon, like Fry, is cryogenically frozen, until he is woken up hundreds of years later to a new world with new people, new surroundings and a whole different way of living.

Yvon of the Yukon wasn’t a status-quo programme. It’s humour was far more akin to Family Guy viewership than that of a CBBC audience and that’s what made it intriguing. Yvon, more like Peter Griffin than Fry, was a bastard- a little bit racist and sexist, and just an overall repulsive pig. But it was Tommy – who found him frozen – and his dad, Bill, who were the real heroes of the story and the people you rooted for.  I think I also fancied Tommy a little with absolutely no shame. Oh, Tommy…

If Yvon of the Yukon was a pre-teen version of Family Guy, Jeopardy was the kids equivalent to The Blair Witch Project. It was fucked up and big time.

Eight secondary school kids from Scotland, aided by their teacher, go on a trip to Australia to find UFOs. A harmless school holiday this was not. Cue three seasons of absolute insanity.

This was my introduction to my ongoing love with surreal stories that make no sense. I had no idea what was going on in Jeopardy half the time but I dug it. Teenagers stranded in the Aussie outback with only their camcorders for survival – what’s not to love? It was like like watching a toned-down slasher movie and a better version of season 4 of Buffy the Vampire Slayer.

Three way kerching wanking signs (like the picture above) turned into the programme’s catch sign; an indication that money had been made for best friends Taj, Seymour and Danny, the show’s central trio. Taj was the mini Del Boy of the gang. His dream was to make one million pounds, and he was getting there by wheeling and dealing his way to the top. Selling crap (t-shirts and ringtones in the day people bought ringtones.) online brought him his money, but he kept his entrepreneurial life secret, with only a few of his closest friends knowing.

Kerching was charming in its harmlessness. The episodes were relatively the same, and the end goal never really changed, but I was still sad when the show ended. I liked the London edge it had to it, something that was exempt from most CBBC programming, particularly in the era where the channel had a good amount of exported Australian shows.

Big Kids was every child’s nightmare come to life. What could make your parents even more embarrassing than they already are/were? Get them to revert back to acting like five years old. Literal five year olds.

The Spillers (probably the most middle-class family to appear on any CBBC programme) attend a school charity event where Sarah and Geoff – the Spiller parents – are hypnotised. Simon and Kate, the kids of the family, realise that the hypnotism has gone wrong when their mum and dad turn into children after being triggered by something or someone. They just have to figure out what that trigger is.

Is it formulaic? Sure, but it is so inoffensive in its unabashed shame for rehashing countless tropes in body swap comedies, that it’s really hard not to like it. Think of it as a British knock-off of anything on the Disney channel and you’ve got Big Kids figured out. 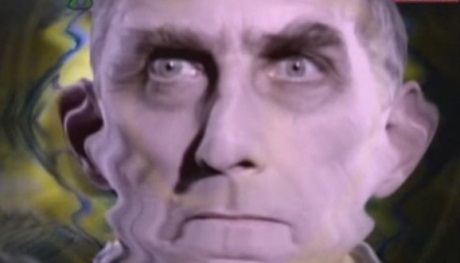 The Demon Headmaster is life-scarring. I’m positive this is the source of all the dreams I had about my primary school headteacher being evil; crawling up the stairs to the old flat I used to live in, wearing a massive witches hat, curling her lizard tongue. Pretty sure about that, actually. How lovely.

Let’s not talk about The Demon Headmaster then apart from one thing – it was terrifying, but amazing. 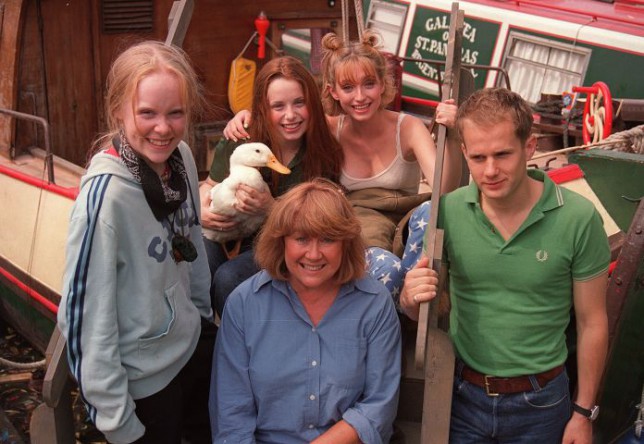 There was one episode in the fifth season of The Queen’s Nose where protagonist Sam wishes her birthday wouldn’t end, using the magical 50p that she and her friends have used to undo their misfortunes. The result of her wish is something out of Goosebumps. Ever since I watched it I’ve thought the most terrifying thing would be to repeat the same day. (I later discovered Groundhog Day made that a story-thing, but it was The Queen’s Nose which introduced it as a possibility.)

The Queen’s Nose had its ups and downs for sure and it wasn’t all perfect. What it did do well was show the sinister side of children. The magic the Queen’s Nose gave the kids was all very Lord of the Rings-ish and proved how greedy even little children get when wielding ultimate power.

Cherokee is a 20-something year old weirdo based in London. She has a morbid fascination with Justin Bieber, is a collector of toys and cute hats, and enjoys musing on popular culture, marathoning Dragon Ball Z, reading comics and napping. Her favourite films include Akira, the LOTR and original Star Wars trilogy, The Matrix, The Warriors, Blue Valentine, My Own Private Idaho and anything that has been touched by the gods she worships (David Lynch, Jean Cocteau and Satoshi Kon). You can find her atcherokeeseebalack.tumblr.com and tweeting @TheCherokeeElf

Tagged as: 50/50, big kids, cbbc, cherokee, get your own back, jeopardy, kerching, the demon headmaster, the queens nose, the story of tracy beaker, tv, ugetme, yvon of the yukon