The Gilmore Girls legacy, 15 years on 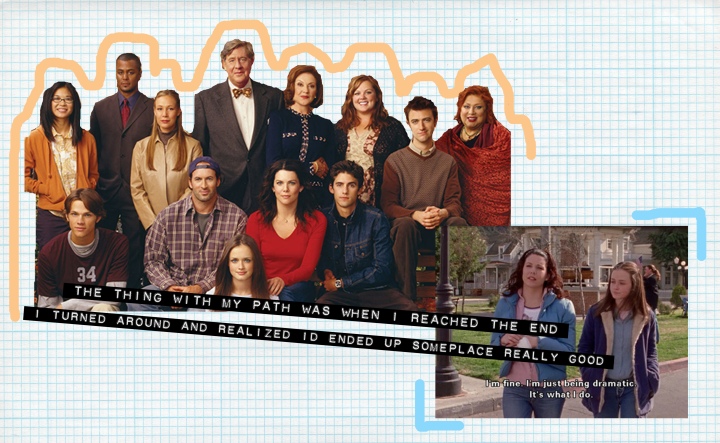 On Saturday June 6th, a near comprehensive group of the primary Gilmore Girls cast and creators took to the stage of the ATX Festival in Austin, Texas, for one of the most anticipated reunion panels in recent years. For a fan, the prospect of these people banding together again was undeniably exciting – especially as, speculation though this may be, it’s fairly likely that in fact it was the first time they’d all been in a room together. Yes, Melissa McCarthy was absent; her incredible rise to fame left even Gilmore Girls in the trail of dust that drifted behind, but the opportunity to see Jared Padalecki, Milo Ventimiglia, and Matt Czuchry share a stage was already too much to bear.

Since it’s début on Netflix in October, the world is living through a Gilmore Girls renaissance. The show has been off the air longer than it was on but suddenly this quirky, curiously paced and intensely chatty comedy drama about the relationships that exist between three generations of Gilmore women is winning legions of new fans – and reigniting the excitement in long time viewers. This cult-like fan-base is made up of mostly women, which is natural, of course, for that rare TV show that chooses to explore almost exclusively female narratives; Lorelai’s struggles as a single mother, Rory trying to bridge the gap between her working class upbringing and the suddenly privileged lifestyle she leads, the duality of Emily’s pain and affection that she feels when in conflict with Lorelai. In the first season at least, the male characters on the show are noticeably undeserved, one dimensional, undeveloped and shoved into the background. Even Luke, who will become the main romantic interest in the show and lead significant story-lines operates as a coffee-giving narrative device in the first few episodes. Gilmore Girls was not without problems – like Friends, a show it was often scheduled against, the show made far to many homophobic ‘jokes’ and had a serious issue with racial diversity. However on the depth of exploration of female characters and their respective idiosyncrasies, Gilmore Girls is still a formidable achievement.

Netflix aside, a curious combination of factors have helped bolster Gilmore Girls to a renewed peak of popularity. Gilmore Guys, a pod-cast made by two twenty-something millennial men, one a long time fan and the other a first time viewer, is certainly one of them. The pod-cast grew out of the most humble beginnings (a half-joking tweet posed by one of the creators) and since the first episode was released, also in October, the pod-cast has become prominent in the Gilmore Girls community – even transforming it into a fully fledged fandom by use of jingles formed from the iconic music and super-cuts of the notorious pop-culture references. With the force of a dedicated audience behind them, the ‘Gilmore Guys’ have interviewed various cast and crew from Gilmore Girls, from Matt Jones who was an extra in one episode, to Scott Patterson who played Luke (I found this episode featuring the casting directors particularly interesting).

Gilmore Guys particularly helped thrust Gilmore Girls back in the public light in the aforementioned Scott Patterson interview, when the actor coyly mentioned that the show might not be done yet, that a reboot is possible. We live in a reboot culture – Fuller House, Twin Peaks on Showtime, a 6-part miniseries for The X Files – hell, Community seems to undergo an annual instantaneous reboot. Therefore it doesn’t seem crazy to imagine a revival, especially as the original run had an ending widely regarded as unsatisfactory; showrunner Amy Sherman-Palladino was kicked off the show before it’s final season and try as they might, writers just couldn’t mimic the unique stories and screenplays she created. She even had the final four words of the show planned out, words that were never realised, words that lend themselves to an 8th season, a movie, a Netflix special miniseries.

At Saturday’s panel, Amy Sherman-Palladino said at the moment, nothing was in the works. But that doesn’t stop fans hoping – or the cast hoping. Everyone up on that stage seemed like they wanted to finish this show the way Amy wanted, to give a proper and fulfilling conclusion. So much pressure is put on a show to end well, and the (current) Gilmore Girls ending is by no means disastrous. Maybe Gilmore Girls is done, finished, in that 2007 finale but so much suggests it’s not; the legacy of the show is both one of loving, funny women both in the characters and cast, and an uncertain potential for the future.