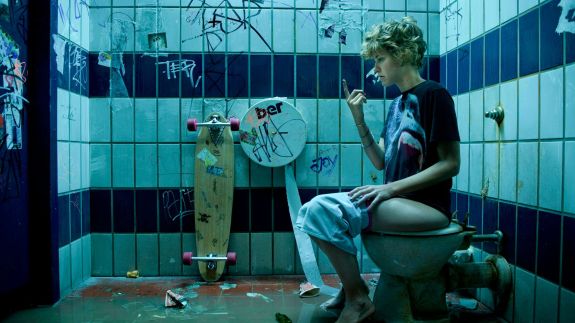 Disclaimer: Don’t eat a breakfast burrito when you watch this film.

The German film Wetlands, directed by David Wnendt, is actually based on a novel by Charlotte Roche (girl power!) Out of curiosity, I decided to do a little research on Roche. Born in England, Roche moved to Germany with her parents at age one. Her mother was a politically and artistically driven woman, reflecting Roche’s artistic endeavours. After dropping out of high school, Roche went on to participate in multiple drama groups and joined a garage rock band. Later on in life, she became interested in shocking people with her own experiments. (I can now understand why her novel Wetlands is partially autobiographical, which I will get into momentarily.) She is currently a television presenter and an author (glad to know I can creatively fuck around a bit after college before becoming a serious adult with a career.) Now onto the film!

I’ve been on a foreign film binge as of late, so my friend recommended Wetlands. He said that it was very raunchy but that the cinematography was amazing. It already sounded like my kind of movie. I think it’s important to watch films that may make us a little bit uncomfortable, and we shouldn’t limit ourselves to American films or films that we’re familiar with. There have been so many times when I would hear a friend complain about a lack of interesting films on Netflix. Have you checked out the foreign films section? What about the Gay & Lesbian section? Independent section? Documentary? Seriously, the world is your oyster if you’re open to these genres. If I could sum this film up in one sentence, it would be, “Down with the Manic Pixie Dream Girls and up with the disgusting girls!” Wait, what? Yes, that’s right. Think of a cross between Amélie and Rules of Attraction. Just how Roche was into shocking people, 18-year old Helen, the main character, challenges others with her vulgarity. The cool thing about this, though, is that Helen is an honest depiction of how girls may act in their own privacy or around their best friends.

At the beginning of the film, Helen narrates a typical day in her life. She is not phased by personal hygiene and is very sexually active: these two characteristics counter the tropes that society has established, the ones that define girls as prim, proper, perfumed, and pure. Not to say that women can’t be like this, but it’s dangerous to state that women are not allowed to be the opposite. Helen is comfortable talking about bodily fluids and likes to ride around on her skateboard. She hates shaving (honestly, who doesn’t?), which is actually the catalyst for the rest of the film. She gets herself into an accident that causes her to stay in the hospital. This is where she meets her attractive nurse, Robin, and where she schemes to get her parents back together. Whilst being confined to her hospital bed, Helen reflects on her friendship with Corinna. I think her flashbacks are my favorite part of the film, because her friendship with Corinna is so comfortable and true. They go on questionable adventures together and are open about discussing their sexualities—something that I appreciate most in my own friendships. Wetlands depicts sex-positive feminism and, although it is a comedic film, it portrays Helen’s invisible hardships that she hasn’t learned to cope with yet. I hope people can connect with this film in a way that makes them feel less alone. At the very least, I hope this film leaves all who watch it with a new perspective.

From Pixar to Studio Ghibli, from Live-action to Claymation, from Wizards to Hobbits, from French New Wave to Horror, from the symmetrical, warm-hued dream of Wes Anderson to the dark, twisted nightmare of Tim Burton, from the bloody, vengeful mind of Quentin Tarantino to the theatrical, contemporary spirit of Baz Luhrmann, 20-year-old Cristina loves it all. Her desire to study film at Seattle University sprung from a childhood of video store rentals and collecting movie tickets (she currently has over 100 tickets and made a mini curtain out of them). Picking her favorite films makes her anxious because she doesn’t want any of them to feel left out. However, she does thoroughly enjoy Amélie, Everything is Illuminated, Eternal Sunshine of the Spotless Mind, and Pan’s Labyrinth. Mostly because they stab her in the feels. Yeah, those are good. Hit her up (or creep) on Tumblr: noirness.tumblr.com and Twitter: @cristinarwhal.