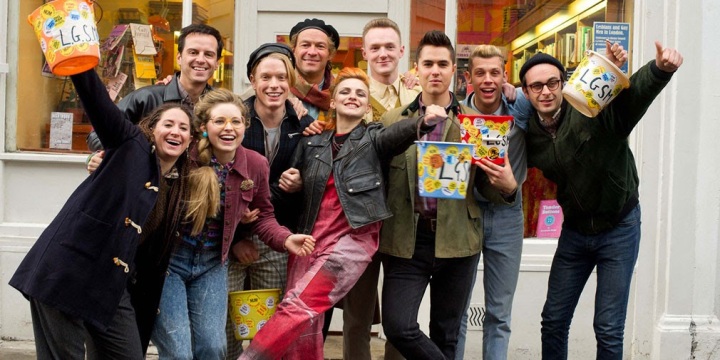 A few months ago I took a trip to the Cornerhouse cinema in Manchester with some friends to see Pride. I entered with high expectations due to the amount of positive reviews from a range of different sources; as a whole it holds a 93% rating on Rotten Tomatoes making it a “certified fresh” film. With this in mind I had walked in with a small voice in the back of my mind saying that it was probably over-hyped and that I would leave underwhelmed, as this had happened so many times before. How wrong I was! Pride has become the best British film I have seen for a long time, everything about it was wonderful, the music, the acting, the storyline, and the humour.

Featuring an absolute eighties feast of a soundtrack (something I of course wept with joy at) with Bronski Beat, Dead or Alive, Wham!, Heaven 17, Pet Shop Boys and many more classics. The more upbeat tracks were casually interspersed with mellow down-tempo guitar riffs used in more poignant moments and were key to making it such an emotional roller coaster.

Pride’s fantastic cast consists of screen legends such as Bill Nighy and Imelda Staunton both of whom played the two main Welsh characters “Cliff” and “Hefina” and also relative new comers Ben Schnetzer who plays the one of the main protagonists Mark Ashton and George MacKay who plays Bromley. Both of these actors were incredible in their respective roles; with Schnetzer portraying the frustration and underlying anger of his character beautifully, especially in the scene when Mark loses his rag with Mike in the second half of the film. MacKay does an especially good job as the worrisome Joe; the scene after his characters parents find out about his homosexuality and become angry was where his performance really stood out to me. Even though he had minimal dialogue, his body language alone was impressive enough that I really felt like I was with him at that moment.

Subtle humour kept the plot light and stopped it feeling too dry and heavy-duty, even though at heart it is somewhat of a political film. The interactions between the older Welsh characters and the Londoners provided most of the laughs, especially the eldest character Gwen referring to the girls as “her lesbians”. The humour was heart-warming rather than raucous. One scene that did steal the show in terms of hilarity was when the Welsh ladies discovered some sex toys under a bed and it was great to see a film make light of a topic that is regularly demonised in the media as being weird. I think everyone should see Pride at some point, not only because the issues raised are of importance but also because it is a near perfect piece of British film.

Megan is a nearly 19 year old from Cambridge, based in Manchester for university and has been in love with all things film ever since she can remember. Her fave films are The Terminator, Drive, Forrest Gump and Fight Club but she also has a huge soft spot for 1980’s John Hughes films. Her main interests include shopping for vinyl, eating too much carrot cake and making wall collages of 80’s bands for her and her friends. She can be found on twitter @megang96 and blogs at popdunk.

Endings and Beginnings in Women Directed Films of 2019

Don’t Kill the Past: 'The Rise of Skywalker' and the Troubled History of Star Wars

Why Women Should Have a Hand in Writing Their Own Characters: ‘The August Virgin’ and Slice of Life Filmmaking