SHE’S ALL THAT: Leia Skywalker 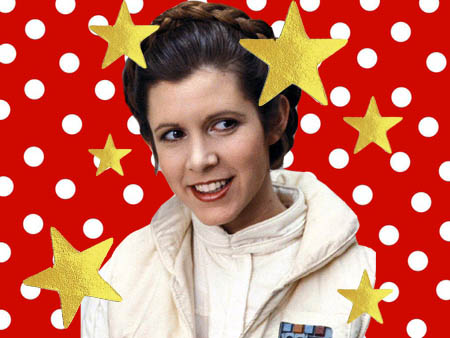 For some, Leia Skywalker is not quite the physical embodiment of strength and bravery that, arguably, she can be. Instead, to them, she is a symbol of fantasy and its intricate culture. For me, however, Leia is something of a revolutionary character; she is a quick thinker, as seen during her ‘rescue’ from the hands of the Empire, which culminates in the wellbeing of herself, Han Solo and Luke Skywalker in the face of the perilous Stormtroopers, in A New Hope, she is an able military commander, a trait shown in Episode V: The Empire Strikes Back on the icy terrain of Hoth, and, ultimately, she is a totally kick-ass heroine, as she proves repeatedly throughout the classic, and seemingly endless, saga that is ‘Star Wars’.

Occasionally brushed off as the somewhat irrelevant sibling of Luke Skywalker, the ‘heroic Jedi’ and ‘all-round saviour’ of the galaxy, Leia is actually far more intriguing and powerful than some would care to admit. While there is there no doubt that Luke is the centre of the story and the budding champion that we all love to root for, Leia is much more than the twin sister he finds himself entangled with as the Rebellion begins to fall further under the oppression of the Emperor and his infamous dark lord in crime. Her determination for the freedom of others, along with her desire for vengeance in return for the destruction of her beloved home planet of Alderaan, gives Leia her drive and results in a liberal with the gift of far greater patience and intelligence than the men that surround her. When ‘Star Wars’ was first released in 1977, Leia Skywalker arrived at exactly the right time, as a wave of feminism swept across the globe, giving adolescent women everywhere an icon to aspire to, at last, a female character that was somehow able to successfully break through a genre dominated by males to become an idol for would-be female leaders all over.

Another aspect of the former princess that makes her so appealing to audiences is the comedic relief she provides in the story of a bloody battle for liberty, an estranged father and son and a galactic underworld of crime. From the moment we meet Leia for the first time in person, rather than as a hologram programmed into a particularly familiar droid, she hands out quips that range from witty to downright cynical, presenting our favourite Skywalker as the reigning queen of sarcasm within the extensive ‘Star Wars’ universe, as well as one of fortitude. The gentle, yet sometimes biting, banter she shares with Han Solo serves as a template for one of the most relatable features of their relationship, as the two fall in love despite their defining differences, which happen to be both social and personal, with Han as the impossibly charming scoundrel and Leia as the privileged royal of Jedi blood that find one another amongst a smouldering revolution and a societal divide. Her unwavering devotion to the smuggler further conveys her courage as she willingly travels into the depths Tattooine’s deserts in order to find him, risking almost all that she has left.

Leia Skywalker may often be portrayed as the ultimate dream woman for fantasy fans far and wide but for me, and for many, she is the unsung hero of the galaxy and the groundbreaking feminist that outer space has always needed.

Despite its Bold Approach, ‘The Violent Heart’ Neglects To Acknowledge Intersectional Privileges and Prejudices

‘Bit’ and the Search for Queer Belonging

[The Final Girls Club] Mitsuko: The (Not So) Final Girl of ‘Battle Royale’