KING KONG’S ANN DARROW: The Beauty that killed The Beast

The classic man vs. beast story of King Kong would be nothing without the girl. The infamous blonde Ann Darrow has three unique interpretations that have changed in characterization over the span of 72 years.

The original 1933 film was akin to the classic monster movies of its heyday, such as Frankenstein and Dracula. And similar to Frankenstein, though we fear him we also grow to pity him. No monster movie was complete without a damsel in distress. Damsels in distress were the objects of desire that needed to be obtained by the villains of the story.

Carl Denham, one of the main characters in the film, is a movie director who needs a pretty girl for his own monster movie that will be filmed on an uncharted island. In a quote he acknowledges Hollywood’s need for this role.

“Do you think I want to haul a woman around? Because the Public, bless ’em, must have a pretty face to look at. Well, isn’t there any romance or adventure in the world without having a flapper in it?”

King Kong’s object is Ann Darrow, played by Fay Wray. Carl Denham picks up the homeless unemployed actress on the street to be that pretty girl he needs for his movie. She fulfills the damsel in distress trope by being a helpless victim and in need of rescue. Ann is unable to help herself, so she needs to be rescued. That job is for Jack Driscoll, the first mate on the ship who believes that “women just can’t help being a bother”.

This conversation between Denham and Driscoll illustrates the themes of King Kong. The beast will fall for beauty for that reason only- her pretty face. Ann’s already got Jack Driscoll, but now she will get Kong.

“Oh, you have gone soft on her, eh? I’ve got enough troubles without a love affair to complicate things. Better cut it out, Jack.”

“Love affair! You think I’m gonna fall for any dame?”
“I’ve never known it to fail: some big, hard-boiled egg gets a look at a pretty face and bang, he cracks up and goes sappy.”

“No, you’re a pretty tough guy, but if Beauty gets you, ya  Huh, I’m going right into a theme song here. It’s the idea of my picture. The Beast was a tough guy too. He could lick the world. But when he saw Beauty, she got him. He went soft. He forgot his wisdom and the little fellas licked him. Think it over, Jack.”

Ann is captured by the natives and offered up as a delectable sacrifice for Kong, but instead of eating her he is enamored with her beauty.

There is no emotional reciprocity in Kong and Ann’s relationship. Ann remains a damsel in distress by screaming her head off while being held by Kong like a rag doll, the prize that he has won. She does not feel anything for him but terror, even as he protects her from T-Rexes and other creepy-crawly creatures.

Their interaction also continued in a censored near-nude scene where Kong rips off Ann’s clothes and tickles her breasts and legs and then, get this, sniffs his finger! Censors felt this was too racy, as it clearly shows Kong’s sexual desire to own Ann.

When Jack Driscoll shows up and rescues her, she doesn’t bat an eye leaving him. Kong continues to angrily pursue his prized procession. He pursues her even after being sent to New York and breaking free of his bonds, chasing Ann down and taking her to the Empire State building. Ann continues to be terrified. The viewer’s sympathy for the ape is finally stirred as we see Ann’s continual fear of him despite his abundant and passionate attention on her.

Conclusion: The 1933 King Kong is truly a product of it’s time, a classic monster movie. The viewpoints of the 20th century did not allow women to be anything other than a damsel in distress, and gorillas were viewed as a violent uncultured brute, the perfect villain for a monster movie.

The 1976 version updates and completely overhaul’s the original film’s Hollywood premise and themes. Instead, it embeds the story with environmental commentary. Fred Wilson is the Carl Denham character as an oil executive forming an expedition to a hidden island searching for more oil. Jack Prescott is the Jack Driscoll character, a primate palaeontologist who wants to see the island for himself.

However, the writing for her character (despite being given some more traits and interests than Fay Wray’s) ends up belittling her right from the start and portraying her as quite a nutcase. For example, she is happily chattering away about “how her luck is about to change” and asking everybody their astrological sign just mere seconds after being told that all of her friends were killed. Dwan also shows no concern about the fact that she is now on an uncharted jungle island expedition with danger around all corners.

This version attempts to establish Dwan as more than a damsel in distress  type and instead as a “feminist” character. She does not just scream the whole time, instead she stands up to the ape.

“You goddamn chauvinist pig ape! You wanna eat me? Then go ahead! Choke on me!”

It does not come off as strong feminist rhetoric, but a lame attempt at a joke that’s even coy and flirtatious.

This version attempts to establish a friendlier and more romantic connection between Kong and Ann than in the original. In one scene, Kong blows air on Dwan to dry her from the waterfall. Dwan looks enamored and seems to enjoy it. She is starting to care about him.

But all romantic themes are thrown aside in the next scene when we see Kong happily leering at Dwan as he peels off her already barely-there clothes. (Just like the censored scene from the ’33 original) The technology of this version (which is actually just a man in an ape suit for the close-ups) allows Kong for more expression, and we clearly see his sexual desire. Kong is still viewing her as an object, just as in the original. And the visual style of Dwan’s appearance, unconscious, in a clinging wet gown, is a male fantasy view.

The film comments on the sexual desire themes, but they are played for laughs as dirty jokes.

“There is a girl out there who might be running for her life from some gigantic turned-on ape!”

And this dialogue between Dwan and Fred.

“How can I become a star because of… because of someone who was stolen off that gorgeous island and locked up in that lousy oil tank?”

“Its not someone Its an animal, a beast who tried to rape you.”

“That’s not true. He risked his life to save me.”

“He tried to rape you honey. And before you cry a lot, you should ask the natives on that island what they thought of losing Kong.”

Also, Jeff Bridges’ character woos Dwan with this charming pick-up line before he kisses her.

“The ape had the right idea”

The famous Empire State Building scene is changed to Kong climbing on top of the World Trade Center buildings. Instead the sheer terror of Fay Wray’s Ann Darrow, this film boldly changes the ending to have Dwan plead with Kong to take her back in his grip so the helicopters won’t attack him.

Conclusion:The effort to put feminist spin on the Ann Darrow character fails and feels like a satire. Although the film-makers attempt to establish a more romantic and empathetic connection between Kong and Dwan, it is still dripping with sexual and misogynistic overtones. 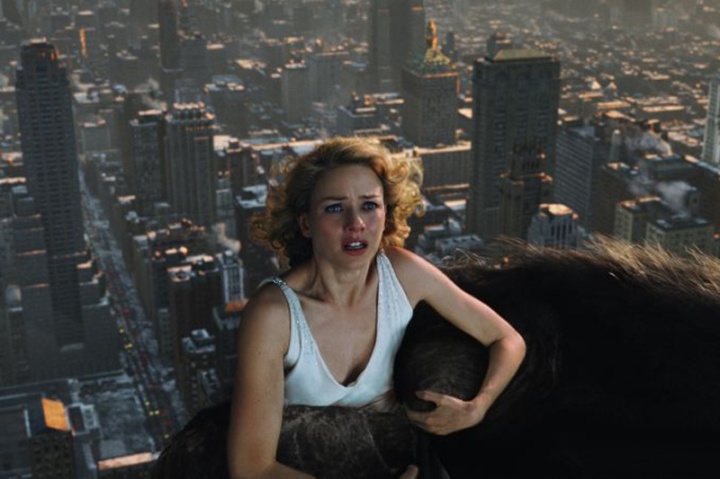 The 2005 version tells the same basic plot line as the original, but it is lovingly crafted and expanded upon by director Peter Jackson. He took great care to create a captivating story that honoured and delved deeper into the original’s.

Ann Darrow is completely re-conceived, far beyond Fay Wray’s screaming terrified rag doll. The writers saw their heroine as a tough survivor from the loneliest city in the world, with dreams and ideas of her own. She is not just a pretty face. They created Ann as a woman who feels compassion and empathy the giant gorilla once her initial terror subsides.

While Ann is more dynamic as a character, so is Kong. He is not portrayed as a brute or monster – (1930’s perception of the animal) instead he is portrayed as innocently animalistic. A gorilla that learned to communicate with sign language, and valued social interactions inspired Peter Jackson for this characterization. This is not the monster movie villain of the original. Instead, he is a Quasimodo type and lonely figure who feels affection for the first time. This in depth characterization is made possible by the incredible CGI technology of today.

What is most unique about this interpretation is that it completely rejects any subtext of sexuality, making an intricate relationship for Ann and Kong. Kong is still offered Ann as a sacrifice, but it is more for eating. Kong still desires and protects Ann, but it is because he wants a friend.

This deeper relationship is established throughout several scenes in the film. The first scene is after Kong has captured Ann. He treats her as more of a plaything, a toy. He doesn’t rip off her clothes or fondle her. He pushes her down over and over again after she stands up. Ann, a performing clown and comedienne, eventually dances and does tricks to amuse and distract him. He pushes her for more and more until she grows tired and rebels, which makes him mad, and then embarrassed.

Ann starts to understand and identify with him in that moment, seeing him as an isolated creature. Ann stops becoming a victim in that moment and becomes something he empathizes with. He is curious about her, he wants to protect her because he cares about her and she has touched his soul.

Kong saves and rescues Ann from dinosaurs, as in the original. After saving her life, they sit by a cliff and see a beautiful jungle sunset. Ann puts her hand to her heart, showing that sharing this tender moment with him moves her. Kong offers his hand to Ann, and she lovingly sits in it as they stare at the sunset.

Ann is incredibly upset when Kong is captured and unjustly taken from his home. Back in New York Kong and Ann share another tender moment after he escapes the theatre by dancing with her on an ice-skating rink. This isn’t the Kong of the original that snatched Ann from her bedroom. Kong sought her out, and Ann willingly returned.

The famous finale on top of the Empire State Building shows Ann pleading and heartbroken that Kong is being attacked (similar to the 70s version.) Kong and Ann share an extremely loving final look as Kong holds his final gaze on her. He gives one last look at not just a beautiful girl, but the one person in the world that he cared about, and who cared about him.

Conclusion: Thanks to modern technology and an interpretation that strips any sexuality, this version makes Ann Darrow a well-rounded character and creates a deeper relationship between Kong and Ann. Andy Serkis’ incredible motion capture work as Kong allows for an infinite range of emotions to explore that dynamic. The classic monster movie is turned into a love story.