As a blog that’s intentions are to discuss and celebrate women in film, a handful of our screenqueens contributors have compiled a list of their favourite female directed films.

Bend It Like Beckham is the kind of film that they used to show you at any opportunity at school to for its “topical issues” blah blah blah, but guess what? It’s actually so good. AND the director is not only female but also a WoC (she’s British-Indian; she directed Angus, Thongs and Perfect Snogging too). The film tells the story of a Sikh Indian girl called Jessminder, living in England, and her love-affair with football – a game which her parents won’t allow her to play because she’s a girl. The film confronts cultural and gender issues, homosexuality, and teenage friendships in a way that it both funny and tender, without being sickly sentimental and/or patronising. Also, in a world where competitive sports are seen as a “boy thing”, especially in the media (when was the last time you saw women’s football on tv? And when you do they’ve shoved it out of the way on BBC3), it’s totally encouraging to see a film centred around women playing sport, being good at it and enjoying themselves – a.k.a not just doing physical exercise to lose weight and become magically attractive. The main characters are two teenage girls, Jess and Jules, and their friendship, which – sad as it is to still have to be commending a film for showing women as, y’know, people – makes a much welcomed changed from film after film about male friendship or male coming-of-age, or where female characters are pitted against each other as enemies (yes, Jess and Jules do fall out over a over a boy, but this is because they’re people and people argue with each other and get crushes and get jealous – not because they’re those catty bitchy women that seem to crop up so often in films). Plus, it’s totally uplifting and happy – without making you want to vomit – which wins it a big thumbs up from me. – Molly 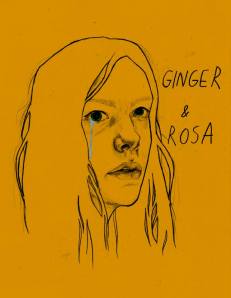 Ginger and Rosa dir. Sally Potter (2012) Director Sally Potter depicts the harsh realities of betrayal, growing up and complex relationships in a heart gripping tale of two best friends, Ginger and Rosa. Set in 1962 amidst the Cold War and the paranoia of a nuclear attack, Ginger and Rosa are as close as sisters who do everything together, including wearing matching outfits. But as Rosa becomes increasingly involved in the complexity of Ginger’s family life, she ends up betraying her best friend in the hope of finding true love. Blinded by the fantasy of true love being all that matters, that everything will be alright once she finds the perfect man, a fantasy that is fed to so many teenage girls, Rosa finds herself ‘in love’ with none other than Ginger’s father. Ginger focuses all her attention on the nuclear bomb, becoming obsessively paranoid about the catastrophic consequences, rather than coping with the deterioration of a best friendship and the loss of a father figure (which he never was much of, as demonstrated in the way he makes Ginger call him Roland instead of Dad and in many other ways that are pretty plain to see in the film). Ginger is an admirable character in many ways: she doesn’t wait for a boy to save her life, she tries to save the world instead; she is forced to grow up before her time and never once loses faith in the people that betrayed her; she is smart and forgiving. I am so glad that we have  a female protagonist whose story doesn’t end in marriage, whose aim isn’t to find a man to fix everything and I really liked the way that Potter shows how these love theories can be flawed and even damaging through Rosa’s story. This film has inspired me, it has made me cry several times and it has given me hope for future female protagonists. If everyone saw how great a female’s story can be without this idea that a male character must come along and fix everything, maybe more inspirational films like Ginger and Rosa will be born and, hopefully, educate and inspire many others. A golden quote from the character Bella: ‘But one is not a poet-ess, Mark 2. Just as one is not a doctor-ess, or a physicist-ess.’ –Beth (Movie Poster also created by Beth) 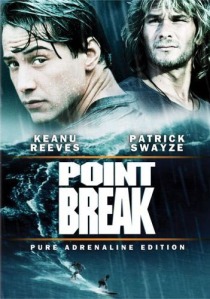 Kathryn Bigelow is supreme. She deals with subjects such as murder, war, vampires, terrorism, politics, crime, and good ole bromances; one could say a ‘masculine’ attitude to film. For that (horrifyingly) she has been CRITISCISED!! I watched Point Break (1991) when I was about ten with my brother. I was a resolute ‘tomboy’ and the cop/surfer/bank robbery/Keanu Reeves/Patrick Swayze/Dr Cox from ‘Scrubs’ combination was all too much.  I mean, WHAT could be better?! Her most recent debuts-such as The Hurt Locker and Zero Dark Thirty (yes, you’re familiar with them and YES-directed by a woman!!)-have been hugely acclaimed; in 2008, Bigelow was the first woman to win and Academy Award for Best Director. Hurray. Let’s hope she releases more and more action films-she sure does them good. –Zoe

Tws of biac: homophobia, ivversion therapy But im a cheerleader, the coming of age, coming of gay satirical comedy directed by the wonderfuck feminist Jamie Babbit. Biac tells the story of megan, a happy go lucky blonde cheerleader in high school, who is apparently hetero *cue most awkward kiss ever*, but everyone around her suspects her of being a lesbian. She is shipped of the ivversion therapy at the straight camp ‘true directions’, a place where they attempt to brainwash young adults out of their homsexuality by having them find their ‘root’ and undergoing over dramatic gender roles. There she meets Graham, a proud lesbian and their relationship begins to blossom over a series of ‘redescovering their femininity’. I personally loved this film because it wasn’t just your average coming of age film, it challenged gender roles and hetreonormality. Itshows us that gender identity and sexuality have nada to do with eachother. The best scene is when one girl is being heavily pressured to admit she’s a lesbian, solely because of her masculine appearence, but ends up yelling ‘all I want is a big fat weiner up my…!’ The theme of femme lesbians in the film constrasted the several butch lesbian films floating around the 1990s eg. go fish. I, like meg, like to be feminine and that doesn’t make me any less of a lesbian, because there really isn’t only one way to be one! Bechdel test: passes with all the flying colours of the pride flag. –Katie 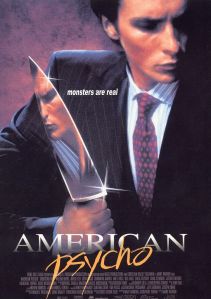 Everyone that I have ever spoken to about this film, whether they’ve read the novel it’s based on (written by Bret Easton Ellis) or not, they have nothing short of adored it. It is most definitely in my top ten movies of all time, and HURRAY it’s directed by a female!! Represent’. American Psycho follows the wealthy Patrick Bateman (Christian Bale) on his deterioration into madness (as you’ve probs guessed, psychopathic tendancies), fronted by his cool, calm and collected investment banker persona. Behind closed doors he chases naked prostitutes with chainsaws and his freezer looks like this…

Sorbet? Although I don’t think the film passes the Bechdel test (there are females who (I think) talk to each other in the film but it’s mostly when being bossed around by obnoxious Pat Bateman or engaging in sexual acts with each other FOR him. One of the ladies is Chloë Sevigny and I love anything and everything she does). However, this movie is COMPLETE genius. Christian Bale is stunning and the dance he does in the raincoat to Hughie Lewis and the News is one of the best pieces of cinema I have eva seen EVA and cracks me up every time. Also, even if you don’t fancy watching it, (gore and stuff aint everyone’s cup o tea) PLEASE watch this scene. I take back what I said about the raincoat, THIS is the best piece of cinema. The sound of the wind when Paul Allen (Jared Leto) hand his card over… shivers. I get shivers. I feel what Bateman feels and I don’t care about business cards. This film is a classic; I watch it every time its on tv without fail and everyone should see it at least once. You’ve done us proud Mary, You go girl. –Melanie

Written and directed by first-timer Rebecca Thomas, Electrick Children follows Rachel (Julia Garner), an exhilaratingly naïve fundamentalist Mormon from southern Utah, on a journey to find the father of her baby. At just 15, she believes that she has had an immaculate conception; the “father,” she’s convinced, is the voice of a man she heard singing Blondie’s “Hanging on the Telephone” on an old tape in her basement. As an unmarried Mormon, Rachel is chaste, but after missing multiple periods and receiving a positive result from a pregnancy test, her vestal status is revoked. Her father (Billy Zane) believes that her best option is to be wed as quickly as possible, even though Rachel hardly knows her potential husband. In a state of panic, anger, and desperation, she steals the family truck and flees to Vegas, bringing along a tape recorder to serve as an audio diary of her trip. Her brother, Will (Liam Aiken), whom Rachel’s parents assume is the father, had fallen asleep in the bed of the truck the night prior and is therefore along for the ride (pun intended). In Vegas, the two meet Clyde (Rory Culkin aka the love of my life), a rebellious rock ‘n roll/ sk8r boi. It is with Clyde’s crude guidance that an entire world of endless possibilities and wonder is exposed to Rachel and Will who must decide between their newfound freedom or their old fundamentalism. –Katarina

Jennifer’s Body (2009) is the story of Jennifer (Megan Fox) a high school girl who gets turned into a demon in a satanic ritual gone wrong. Her demonic powers make Jennifer super beautiful with the unfortunate downside that she has to feed on human flesh to maintain her good looks. It isn’t exactly the most original of plots, but it’s fun. What I love about the movie is that on first glance, it seems very “boy-ish”; the whole pretty girls in horror movies thing that we’ve seen before (need I mention the kiss scene??). However, it’s so much more real especially the female characters and their attitudes towards friendships and school. Having been written by the same genius mind behind Juno (2007), Diablo Cody, Jennifer’s Body was bound to be hilarious and it lives up to that expectation. –Joanna 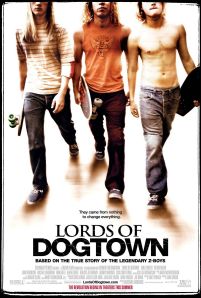 Catherine Hardwicke is most definitely one of the big guns when it comes to female directors, dealing with everything from low budget flicks to YA adaptation blockbusters (yes, I actually fucking loved the first twilight), she’s done em all but my favourite by far is Lords of Dogtown the coming-of-age tale based on a true story of surfing teens who completely re-invent skateboarding. What I love about Hardwicke’s style is her sense of nostalgia in every one of her films, the cinematography perfectly captures a time and place, also her ability to skip between subject matter, she never pigeon-holes herself, everything she produces is fresh and captivating. Aside from Emile Hirsch I cannot remember my original intentions for seeing Lords of Dogtown but I’m incredibly glad I did, this film inspired me to break away from the mould, be experimental and most importantly, try to get me a hot skater guy. –Chloe

‘The Velvet Underground’ Wears Its Heart on Its Sleeve With Style

The Problem With Turning Cruella Into A Feminist Icon