When I first heard that Carrie was being ‘remade’ I’m sure I wasn’t the only person exclaiming with a large sigh, ‘what the fuck’. But with Kimberly Peirce (Boys Don’t Cry) in the directors chair I breathed a large sigh of relief, in such capable hands this had the potential to be brilliant, surely?

Sadly this wasn’t the case. Although it boasted an incredibly talented cast the film got lost in the material. When asked about her adaptation Peirce had said she wanted to make a version closer to the book than DePalmas original which would mean we’d get to see Carrie rampage the town to track down her tormentors. Skip to the actual film and what we got was some pretty bad CGI and Carrie herself turning into a more vengeful Carrie than we’ve ever seen before. Whilst the kills and gore were mildly entertaining it was incredibly hard to sympathise with a Carrie that was fully aware of her powers and using them in violent ways as opposed to the ‘deer in the headlights’ unaware Carrie Sissy Spacek gave us in the original. 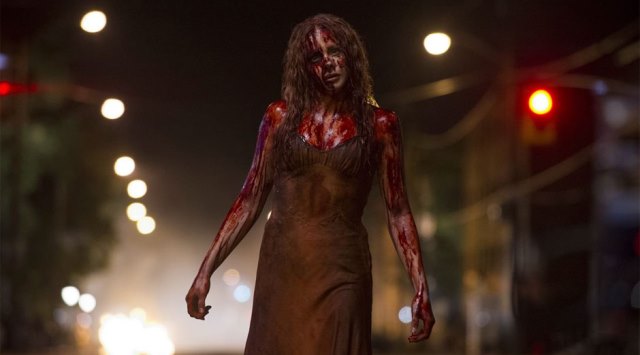 Updating the film to present day also came with a glitzy Hollywood sheen, instead of creating the darker vision Stephen King imagined, we get Mean Girls with added blood. Portia Doubleday as Chris Hargensen was an undoubtedly evil Regina George-esque figure with more hairspray than heart.

As a sucker for anything Chloe Moretz is in anyway (if there was anyone to play Carrie White in 2013, it’s her) of course I did enjoy the film. The introduction of cyber-bullying to the material was a bold move, and it paid off. Having the shower/period scene uploaded to YouTube by her peers made Carrie’s vengeance even more sweet and also hit home for a lot of teen viewers. In world that constantly pressures teen girls to fit a specific image, Carrie stuck out more than ever before. Her longing to join the rest of her peers was particularly heartbreaking in Peirce’s adaptation, she was more aware of what she wanted and restrained from it as opposed to Spaceks oblivious depiction of Carrie White. I found this to be a great message about how the media and advertising is in-escapable in the present day. With the 70’s being a major time for feminism with the rise of the second wave, DePalmas version spoke to a generation of women who were now just realising the power they had, obviously not telekinetic, but the power of freedom and standing up for themselves (Holly L Derr wrote a brilliant article here discussing the subject). In Danse Macabre, King has this to say about his novel: ‘Carrie is largely about how women find their own channels of power, but also what men fear about women and women’s sexuality. Writing the book in 1973 and only three years out of college, I was fully aware of what Women’s Liberation implied for me and others of my sex. Carrie is woman feeling her powers for the first time and, like Samson, pulling down the temple on everyone in sight at the end of the book.’ With the realities of sexism still being present today, Peirce steered away from this idea and eliminated the male gaze, giving us a predominantly female focused cast exploring the relationships between these girls, the bully/victim and mother/daughter relationships being all the more present than the original film.

I found Carrie and Margarets relationship to be much more complex in Pierces adaptation and that is solely down to the acting of the wonderful Chloe Moretz and Julianne Moore. Presenting Carrie as caring towards her mother made the abuse all the more painful whilst we also got to see Margaret actually attempting to take on a caring mothers role with the brutal opening scene depicting the birth of Carrie and Margaret’s decision whether or not to kill her added an entirely new side to the Margaret White we has previously known as simply a religious fanatic.

Peirce had her heart in the right place but didn’t take full advantage of the material in her adaptation, leaning towards a teen movie revamp than an all new book adaptation. It was taking the DePalma adaptation, sprinkling a little glitter on it and adding Vampire Weekend to the soundtrack.

Is our criticism of Moretz’s Carrie as too pretty/too vengeful an admittance to our belief in the system that attractiveness equals happiness and our willingness to quickly dismiss bullying as ‘just a joke’ like Chris Hargensen?

But this begs the question, what did Carrie White ever do to you?