Winona Ryder is my Jesus. I grew up watching Beetlejuice and her goulish charm (and the scene dancing to Harry Belafonte’s Jump in Line) has always stuck with me. She was confident and unusual and interesting. To me, these adjectives describe her utterly and why I love her so much!

About five years ago, I rediscovered Winona in the 1990 film, Mermaids (also including Cher and a tiny Christina Richie!!) in which she was nominated for a Golden Globe. It has since become one of my favourites-mostly due to the admiration I felt for her character-the elfish and quick witted Charlotte Flax.  I don’t particularly relate to her (including her desire to be a nun) but Winona’s sharp, intelligent humour and dramatic imagination definitely makes me want her as a best friend!

By chance, soon after, I stumbled across a photo of a then engaged Winona Ryder and Johnny Depp, arm in arm, posed with a quote spoken by Johnny Depp: “I love that girl. I love her. I love her almost more than I love myself.” (COMPLETELY still pro Johnona Repp)

My heart melted and so, my obsession began… Discussions followed, which led me to the film, ‘Heathers’ (SO brilliant) as well as ‘Girl, Interrupted’, before I journeyed on to some classics, including “Edward Scissorhands”, Woody Allen’s ‘Celebrity’,  ‘Reality Bites’ and ‘Welcome Home Roxy Carmichael’… (She also appears on the Simpsons. What is not to love?!)

She has worked consistently for nearly thirty years and although recently her films are mostly not superb, I continue to admire and appreciate her. Winona Ryder will live with me forever …as well as on Johnny Depp’s skin! 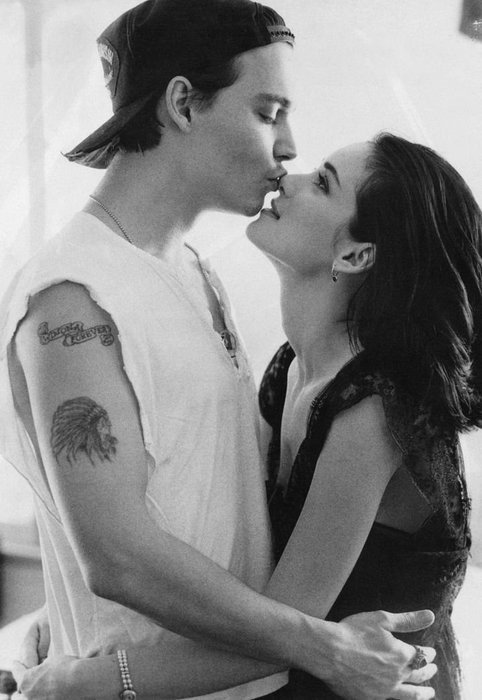