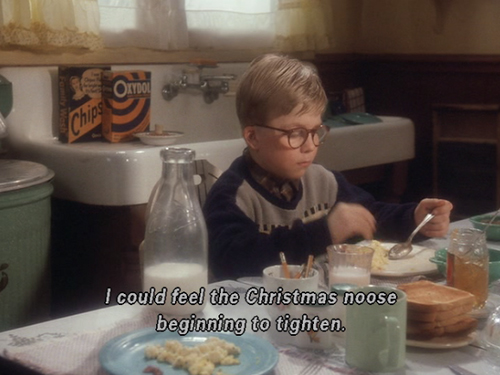 A Christmas Story is that of a young boy named Ralphie and his quest to get the Red Ryder BB Gun (Carbine-action, 200-shot, range model) for Christmas but all the adults he know tell him he’ll just shoot his eye out.

I love This movie because it captures just how christmas is for every kid, from the oh-so smart ways of convincing parents to buy the gift you want, such as just straight up putting the advertisement in their magazine, or all over the house so that they’re bound to see it. Because it’s narrated by a grown up Ralphie, it makes all the childlike descriptions even more dramatic and the fantasy scenes even better!! It just brings in all the drama everyone tries to convey when little, but never quite gets. At times it honestly feel like the lines came straight from a kids mouth.

This is also home to one of the best gags in christmas film history, in my opinion anyway, is that of the leg lamp that Old Man Parker wins in a competetion which has lead to the best christmas costume ever??

DOES IT PASS THE BECHDEL TEST?

Well it definitely has multiple woman named characters, even if one of them is called ‘Mother Parker’. To be fair, this film is from a child’s perspective so there wouldn’t be any reason he would know his mom’s name, even his dad is just called ‘Old Man Parker’. There are definitely conversations between women, but I don’t know if they would count because they tend to be about Ralphie or about things he’s done. While this film doesn’t really pass the Bechdel test with flying colours it does present some hilarious women characters.

Tagged as: a christmas story, Anything and Everything, Christmas, christmas movie countdown, Christmas Story, molly bloom