Almost perfectly coinciding with the start of this blog it’s just been announced that an all female horror anthology is in the works! For all you lovers of gore and all things scary out there this could essentially blow the socks off The ABC’s of Death and the widely popular V/H/S (both of which I hated, sorry).

The anthology titled ‘XX’ is hopefully due for release sometime in 2014 and will feature 5 short films all by female directors and each will cast a female lead. The shorts are going to be interwoven by stop-motion imagery from Sofia Carrillo. 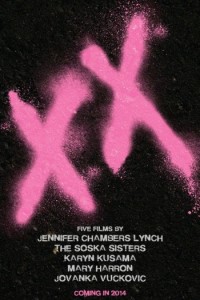 So who are these lovely director ladies I hear you ask?

With horror being one of the least female driven genres of the movie world, I’m pretty sure there are female horror fans everywhere rejoicing at this news, knowing that we can finally start to pave the way for more female horror directors/writers to come forward and  project their voice in a genre that far too often silences us.